How Customer Service Can Increase Sales

Tips for Putting Your Home in the Market During the Holidays

July 25, 2018, Facebook officially announced the launch of the “Facebook Watch Party”. A feature which lets Groups watch videos together, host video streaming sessions, chat and comment on the videos at the same time. 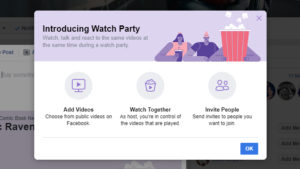 Facebook Watch Party is already available worldwide,  but with a few feature limitations.It currently supports Facebook Groups only and not Pages (yet) and it will only work with videos that are hosted in Facebook and not from other video hosting apps/websites.

Watch party has been, so far, used by people and businesses to engage more to their audiences and customers. They have been using the feature to do live videos, webinars and tutorials which are helpful in their online presence and marketing their business. And it’s a great way to interact with your clients/customers for real time inquiries.

Facebook has been the go-to when it comes to social networking since it connects and covers all generation. And they have really thought of new and effective ways in building a community.

New features and applications has been popping left and right. All of which are unique and helpful. But remember that your content is still the key to a successful engagement.  Effective marketing is not just creating the market but retaining the market and being the market.

3 Reasons to Have Social Media For Your Business

Read more
This template supports the sidebar's widgets. Add one or use Full Width layout.
We use cookies to ensure that we give you the best experience on our website. If you continue to use this site, we will assume that you are happy with it.Agree